Martin Fourcade was born in Céret in the Eastern Pyrenees on September 14, 1988. He was introduced to winter sports at a very early age, particularly nordic skiing and biathlon. After his studies in Font-Romeu, he quickly began his sporting career with a first race at the World Cup final in Oslo Holmenkollen in 2008.

He revealed himself to the biathlon world and the general public with several great performances during the 2009-2010 season, culminating in a silver medal at the Mass Start at the Vancouver 2010 Olympic Winter Games. Winner of his first races after his medal, he finished fifth in the overall ranking of the 2010 Biathlon World Cup. 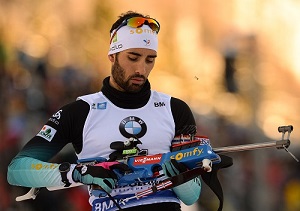 Martin continued his progress in 2011 by finishing 3rd in the overall World Cup standings and especially by becoming World Champion for the first time, winning the pursuit. From 2012 onwards, he began his period of domination over the biathlon, with a record seven consecutive Big Crystal Globes rewarding the winner of the Biathlon World Cup. Over these years, Martin has won a total of 25 world medals, including 11 titles.

In addition to these performances, Martin moved to the French Pantheon of Nordic and Winter Sports by winning 5 Olympic titles, becoming the most decorated French sportsman at the Olympic Winter Games. His sporting performances go hand in hand with public recognition, Martin having become one of the most popular French athletes.

Cookies ensure the proper functioning of our services. By using the latter, you accept the use of cookies.